APM Hexseal is proud to announce 2 newly-patented products, the Inverted Bellow Full and Half Toggle Environmental Sealing boots (1131/60 and 1132/60). There are an increasing number of breakers/switches that when covered with an environmental sealing switch cover can trip the breaker switch into the off position due to the mere physics of being covered by the wrong type cover. APM uses low durometer rubber in many cases to guard against this tendency. However, there are an increasing number of breaker/switches where this strategy alone is not sufficient, and our "Ultra Flex Series" with a bellow design incorporated therein is very able to combat this problem. The 1131/60 should be used with CBI "B"/"DD" frame, Airpax "Snapak" frame, and Carling "M" frame all with an extremely light spring load on the baton style actuator handle. Miniature toggle switches that have an extremely light actuation force should use the 1132/60. These are used extensively by the military, marine, industrial, construction and commercial industries around the world. 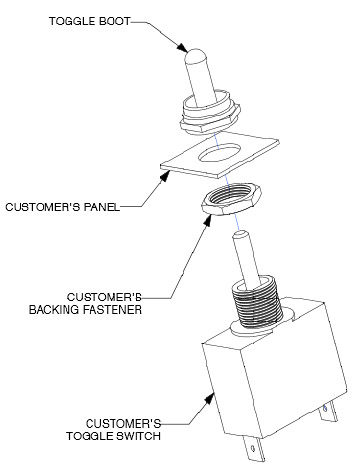